What is the Bullish Engulfing Pattern?

The second candlestick of the pattern gaps lower to open at a level lower than the close of the first and closes higher than the open price of the first, hence completely engulfing its body.

The same second candlestick may have little or no upper shadow, signifying the high unopposed buying pressure to drive the imminent uptrend.

A stronger reversal move is likely to occur when the first candlestick of the pattern is preceded by four or more bearish candlesticks. This emphasizes a downtrend as a prerequisite.

A stronger signal may also be hinted if the first candlestick of the pattern is a Doji (without a body) followed by the long bullish candlestick which engulfs it upwards.

Downtrend reversal is confirmed when the candlestick immediately after the second closes higher than that second candlestick’s close price. That provides a sure signal that the price reversed and an uptrend is beginning.

Candlestick confirmation is, however, not enough. You can further use technical indicators to confirm the reversal.

Are you a Fixed Time Trader on Olymp Trade?

Then you should set your trade duration to at least 3 times the candlestick time frame. This gives the price enough time to move without the expiry of the trade.

The following quick and simple steps can be applied to trade the Bullish Engulfing Pattern on Olymp Trade;

Let us dive into the details of each step to establish what exactly should be done in each. Come with me.

It is quite simple to identify a downtrend. It occurs where the price keeps falling forming both lower highs and lows. The reason we are looking for a downtrend is that the Bullish Engulfing Pattern occurs at the end of a downtrend to signal a reverse of such a trend.

Once we identify a downtrend, then we are sure we are looking for the pattern at the right place, so we proceed. 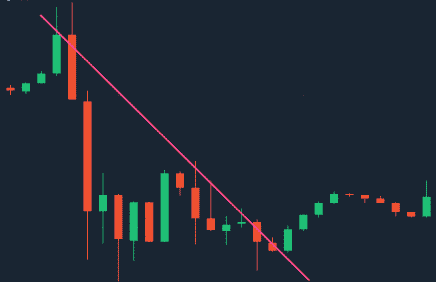 The second candlestick of the pattern gaps lower to open at a level lower than the close of the first and closes higher than the open price of the first, hence completely engulfing its body.

A stronger bullish reversal is likely to occur if;

Identified such a formation? Then you have your Bullish Engulfing Pattern.

Remember that a simple occurrence of the Bullish Engulfing Pattern is not sufficient to drive an uptrend. You need several confirmations to conclude that the downtrend is reversing.

Your confirmation tools like the RSI and the CCI now come in. We anticipate the price to reverse upwards. If the RSI or CCI indicates an oversold condition we would be more justified to conclude that the price will rise.

If such confirmatory conditions are met, we then have some good buy signal there, so we proceed to the next step.

Just after the downtrend reversal has been confirmed, nothing holds us back from executing that Buy trade. Swing into action and enter a Buy position immediately.

This is for those who will be using the strategy on the Olymp Trade Forex Platform.

You must never trade forex without using Stop Loss orders. If you do, then you know that your capital is at risk of sudden depletion.

Now, the ideal position for your Stop Loss order is just below the low of the second candlestick of the pattern which we said engulfs the first.

There is no prior price move we can use to estimate the distance the uptrend will cover here. Therefore, you need to employ your Profit-taking tactics as a trader.

The tactics you apply may be the use of trailing stops where you keep moving your stop loss up as the trend grows.

You may also decide to apply risk to reward ratio to set your Take Profit at a reasonable level with respect to the Stop Loss level.

Additionally, you may decide to identify a major resistance area where the price seems to reverse downwards and take profits from that level.

The choice is yours.

Wrapping Up on the Bullish Engulfing Pattern.

Today’s post has adequately equipped you on identifying and subtly applying the Bullish Engulfing Pattern in your Olymp Trade trading.

As the simple pattern that it is, it also holds the potential to make you amazing profits on your Olymp Trade account.