Cervical cancer is a fatal type of cancer that causes abnormal cell division in the cervix — resulting in unnatural pain under a woman.

According to research, human papillomavirus is believed to be a major cause of cervical cancer.

Most women diagnosed with this type of cancer are shown to develop it after decades of years of human papillomavirus infections.

Human papillomavirus can cause either genital warts or cervical cancer.

However, HPV can be prevented to eradicate complications it causes to our health.

And this can be done by three HPV vaccinations recommended to young adults between age 9 and 26. These vaccines help reduce the risk of HPV infections. 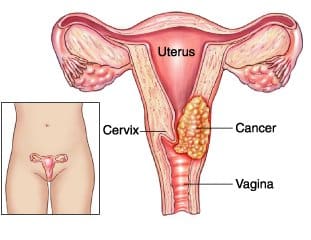 What is cervical cancer?

This is a type of cancer that attacks the female reproductive system to cause an abnormal cell division at the cervix.

Through cell mutation, tumors spread to nearby tissues resulting in fatal cell complications that can lead to the death of the infected persons.

Cervical cancer is mainly contributed by human papillomavirus as mentioned in the introduction.

Here are two main types of cancers of the cervix

The adenocarcinoma cervical cancer usually occurs in the column-shaped glandular cells around the cervical canal. It rarely takes place in some women.

On the other hand, squamous cell carcinoma cancer takes place in the squamous cells. Squamous cells are the thin, flat cells that surround the outer part of the cervix that connects to the vagina.

It is one of the popular cervical cancers known in women.

Signs and Symptoms of Cervical Cancer

In case of the above symptoms, visit a doctor for a medical checkup before it is late, however, regular pap tests or smear tests can help detect any cervical cellular changes that may indicate the development of cancer. This can help in the early treatment of cancer.

Staging helps determine the extent of cell mutation. Below are the stages of cancer: 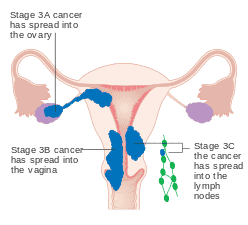 Stage 2: – The tumor is 5-7 cm and might have spread to the tissues around the affected area, It may or may not affect nearby lymph nodes.

What are the causes of cervical cancer?

This type of cancer can be a result of human papillomavirus, poor sedentary lifestyle and poor dietary choice. Some of the major causes of cervical cancer are:

a. Exposure to human papillomavirus

One of the common causes of cervical cancer is as a result of human papillomavirus infections.

HPV is a sexually transmitted virus that has no cure. HPV causes a low immune system, therefore, providing room for other infections such as cervical cancer and other STIs.

Prevention of HPV through administration of HPV vaccine at the age of 9 to 26 is very effective. Therefore, without the vaccine, the risk of HPV is higher. 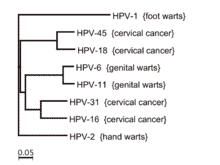 Women with many sexual partners generally have a higher risk of HPV infection.

For instance, a woman who has three sex partners on the same day or same time can easily get infected with HPV or other sexually transmitted infections (STIs) like syphilis, gonorrhea, and HIV.

Most women who smoke increase the risk of squamous cell cervical cancer. The toxic substances from the smoke slow down the blood flow and neurotransmission.

This can lead to a weak immune system to fight off infections and can contribute to the process that causes some cancerous cells to become cervical cancer cells.

A good number of females exposed to chlamydia, gonorrhea, syphilis, and HIV/AIDS generally have higher chances of developing cancerous cells.

STIs are one of the causes of cervical cancer. It lowers the body’s immune system, thus, the body cannot defend itself against HPV.

The STIs can cause severe pelvic pain, vaginal bleeding, and other discharges with strong odor

Women suffering from HIV/AIDs or who have undergone some medications, for instance, seeking Immunosuppressive medications such as transplants can lead to cervical cancer.

The medications weaken the immune system making the women susceptible to HPV.

f. Use of contraceptive pills

The pills can lead to unusual bleeding after or before periods.

They can as well cause a hormone imbalance that may result in health complications. Always seek medical advice before using birth control pills.

Giving birth at a teenage can cause HPV and in old age, the woman can develop cervical cancer. Research reveals that women who gave birth at teenage are likely to develop cancer cells at an older age.

Also Read: – Best Cancer Hospitals in The World And in Kisumu

Unhealthy weight gain can lead to chronic illnesses such as cancer.

i. Genetics and family history

Genetic is one of the causes of cervical cancer. Some women can get cancer due to hereditary cancer syndrome.

That is the ability of a person to inherit a predisposition for a type of cancer. For instance, if any of the parents have genes for cervical cancer, they may pass on the altered instructions to their offspring.

On the other hand, generally genetic code controls the division of cells and their expiry time.

Therefore, changes in the genes can lead to alteration of cell DNA leading to cervical cancer.

The rates of cervical cancer appear to be higher in areas where incomes are low.

For instance, in third-world countries, there is a higher number of cancer cases due to the low economic status of most of the residents.

In argument, lack of finance to support the family members may lead to prostitution, which will expose the woman to multiple sex partners in order to get money.

In addition, in a low social economic area, most children lack parental care or guidance, thus, causing teenagers to be sexually abused. This might lead to exposure to STIs and HPV among other infections.

The results of low genital neoplasia increase the risk of a woman developing cervical cancer.

Study shows that a woman with low genital neoplasia has high risk of HPV that later may result in a cancerous cell in the reproductive organ.

How to diagnose cervical cancer

In most cases, doctors start diagnosis with a visual examination of the body and a complete medical history checkup to identify changes in the body of the patient.

After which a sample of blood, urine, and tool are gathered for laboratory test

For cervical cancer, a pap test or smear test and HPV DNA test are carried out in order to detect any abnormalities in the cervix cells.

Additional tests such as colonoscopy, biopsy, CT scan, LLETZ, MRI, and pelvic ultrasound is done for further identification of the tumor size. 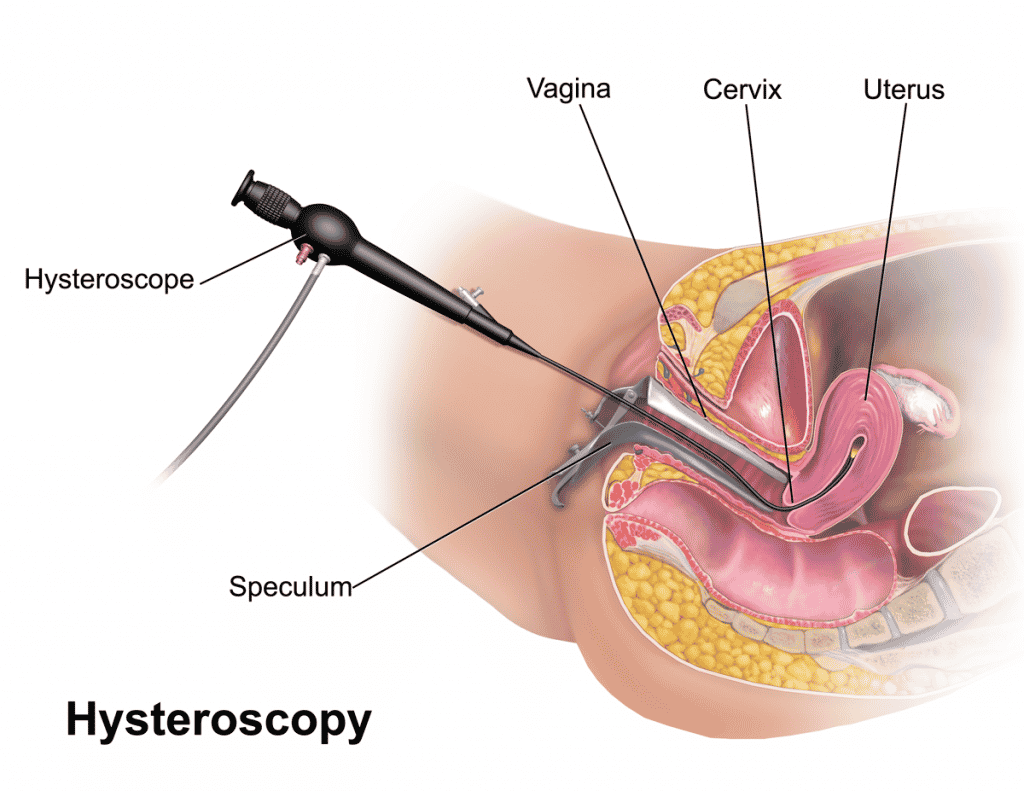 Can cervical cancer be treated?

Yes, cancer can be treated when it is early detected. However, treatment of cancer varies according to the type of cancer and the stages of cancer.

It is crucial to have regular cancer screening to help in fighting cancer.

The following treatment methods are very effective base on the stages of cancer determined. However, always consult with your doctor before administering to any cancer treatment.

It also reduces the risk of cancer coming back.

Note that radiation therapy may be an option when cancer cannot be completely removed during surgery.

The treatment method may also have side effects such as diarrhea, nausea, bladder irritation, and change in the menstrual cycle.

In chemotherapy, certain drugs are administered to kill cancer cells. Systemic chemotherapy is used to treat cancer that has mutated to nearby tissues.

However, before chemotherapy treatment, seek advice from the surgeon due to the side effects of this treatment. The effects may include hair loss, fatigue, infertility, nausea, and diarrhea

It is one of the common parts of the cancer treatment plan.

For this method of treatment, a surgeon may remove the tumor and a small margin of surrounding healthy tissue in the cervix to slow or even terminate the spread of the disease.

It is specialized medical care that emphasizes pain relief and other symptoms of a fatal illness. This involves using genetic testing to check and identify the best treatments for cancer.

Generally, immunotherapy uses special medicine and other treatments to boost the immune system to fight off cancer cells and other diseases. It is done in hand with chemotherapy to treat advanced cancer.

For better health, preventing some of the causes of cancer like poor sedentary lifestyle, avoiding multiple sex partners, and exposure to HPV is very important.

In addition to being faithful to one sex partner; practice safe sex, get regular Pap tests, take an HPV vaccination in your earliest years and try to eat healthily.