If you are familiar with the head and shoulders trend pattern, then double tops and the double bottom patterns should be a walk in the park.

Essentially, they both signify trend reversal. But while they don’t look the same, they are formed through almost the same process.

In this post, we will dive deeper into double tops and double-bottom patterns on Olymp Trade, how they are formed, and how to make money trading the same.

Let’s get right to it, shall we?

What are double tops and double bottom pattern?

For better understanding, I will discuss each pattern independently.

This pattern appears at the top of an uptrend to signal a change in the direction of the price. In other words, during an uptrend, the formation of a double top pattern signals an impending downtrend.

Here, the ‘tops’ or peaks are formed as the price keeps creating higher highs followed by subsequent falls.

These peaks are at a position where the price cannot break.

How double tops are formed.

Prices rise to a point where they can’t rise anymore followed by a retracement.

The retracement is however temporary because, within no time, the price starts scaling again.

But on reaching the same level as previous high, they fall again.

Now, this is the second time the bears are taking control of a rather uptrend market.

As such, it is safe to conclude that the bulls are losing power and the price will reverse.

The two highs give you the double tops.

As you can see from the screenshot above, the two tops were formed after a strong uptrend.

This is a clear indication that the trend will reverse. As a result, you should be ready to enter a short position.

Where to put a sell order on this chart pattern.

Place the entry order below the neckline. This is because such patterns signal impending reversals.

Here is a quick summary of how to identify top patterns

Next, let’s look at the double bottom chart pattern.

A double bottom chart pattern is also a trend reversal formation. Only that this time around, we are going long instead of short.

They are formed after a long period of the downtrend. Two subsequent troughs (bottoms) are formed. 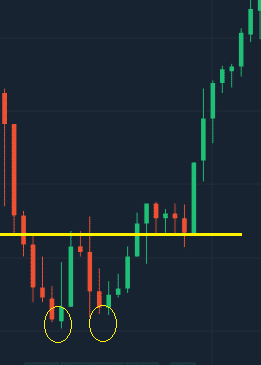 From the screenshot, it is clear that after the previous downtrend formed two troughs (bottoms) after it failed to break a certain level.

Also, note how the second trough wasn’t able to break the past the fast bottom level.

This is enough to signal that the price is going to reverse and head up.

Where to enter a position on double bottom chart pattern on Olymp Trade.

To be on the safe side, you should wait until the pattern is fully formed before you open a position.

What do I mean?

Do you see the neckline (yellow line) in the screenshot above?

Well, wait for the price to break and close above this line, then enter a long position.

Here are some rules for identifying the double bottom