How to Read Price Action And Trade with Bollinger Bands.

Are you fond of Price Action trading?

How do you usually carry out your price action trading?

Do you use candlestick patterns and chart patterns alone?

Did you know that certain chart analysis tools such as Bollinger Bands can also help you to read price action?

Well, so many questions there right, and all I am saying is that Price action is multifaceted.

While some traders may purely rely on candlestick and chart patterns, others may find some chart analysis tools helpful.

One of the most commonly used and the best chart analysis tools helpful in price action trading is the Bollinger bands indicator.

In this post, we are going to explore how to read price action with Bollinger bands.

Before we go deep though, let us define the terms.

What is Price Action?

Price action is a trading technique that allows a trader to read the market and make subjective trading decisions.

Trading decisions in this technique are based on the recent and actual price movements, rather than relying solely on technical indicators.

What that means is that traders have limited use of technical indicators but heavy reliance on the recent and actual price movements.

It has been said time and again that traders need to consider what the market is doing rather than what indicators, which may lag, are doing.

Such is the entire rationale behind price action trading.

Have you understood what price action entails?

What are Bollinger Bands?

Bollinger Bands is a technical indicator that consists of three lines namely:

The standard value for N is 20. And the usual multiple applied is 2.

The Upper and Lower band lines form an envelope around a moving average of price (middle band line).

The width of that envelope depends on the price volatility (standard deviation).

That is so because the upper and lower band lines expand and contract in respect to the middle band line, according to the standard deviation of past price action, otherwise known as market volatility.

The expansion and contraction of the upper and lower band lines in respect to the middle is the key to using the tool to read price action in the context of the market’s recent volatility.

Price action traders need to watch how the Bands interact with price action to be able to obtain valuable trading information from the tool.

Basically, when market volatility is low, the Bollinger bandwidth will be narrow.

On the other hand, the Bollinger bandwidth will expand or be wide when market volatility is high.

How to Read Price Action with Bollinger Bands.

We have uncovered what price action and what Bollinger bands are.

Now, let’s focus on unearthing how you can use the Bollinger bands technical indicator to read price action.

To begin with, understand that Bollinger bands are easy to use to assess price action.

There are three major ways in which Bollinger bands can be used to read price action.

We shall dwell on the three as we discuss them in detail. Here are the three ways in which Bollinger bands can be used to read price action:

Primarily, it is not Bollinger bands that will tell you that the market is ranging.

You will have to make a prior observation to establish that the market is neither trending upwards nor downwards but sideways.

That will mean that the market lacks enough volatility to move in a sustained manner either upwards or downwards, trapping it within a range.

You can then use Bollinger bands to trade such a range, but then you ask how.

In such a sideways market, you will realize that the price behaves in such a way that price bars reverse once they hit either the upper or the lower band lines.

To make it even more precise, you will realize that there are definite support and resistance levels which the sideways market seems to respect.

Once a price bar comes to a point of resistance that happens to coincide with the upper band line, then the price reverses downwards.

On the flip side, once a price bar comes to a level of support that happens to coincide with the lower band line, then the price reverses upwards.

Another very important thing to note during such a scenario is that the bandwidth of the Bollinger band indicator will be narrow.

The standard deviation of the upper and lower band lines from the middle line will be reduced due to low volatility. Thus the bandwidth will be narrow, unlike in other cases as we shall see later.

Trading the Range with Bollinger Bands. 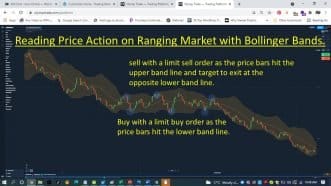 Is it not so easy to trade in such a market really?

It definitely is, because all you need to do is to fade moves with bars that bounce off the upper or lower band lines.

Buy with a limit buy order as the price bars hit the lower band line.

For this trade, a proper exit is at the level of the opposite upper band line.

On the other hand, sell with a limit sell order as the price bars hit the upper band line and target to exit at the opposite lower band line.

It is not enough to rely on the fact that the price will definitely reverse after hitting either band line though.

You can use other confirmatory methods such as bullish candlestick patterns before a buy or bearish ones before a sell.

Lastly, on this point, you might be asking when the best time to trade these kinds of setups is.

Markets usually range before the release of critical economic data.

Therefore, if you are well versed with the release of economic news, make sure to look for ranging markets before such releases and make use of the Bollinger bands tool to trade the range.

This strategy involves a combination of Bollinger bands and what price bars are doing which will then confirm that the market is up to a breakout.

So how do you establish a breakout using the Bollinger bands technical indicator? Simple.

Once price bars begin to push against the upper band line and not reversing downwards but continuing upwards, then such will most probably be an upward breakout.

On the contrary, if price bars begin to push against the lower band line and do not seem to reverse but continue downwards, then such will definitely be a downward breakout.

Scenarios like these will definitely be accompanied by an expansion or widening of the Bollinger band indicator bandwidth.

What else do you expect when the price is pushing against either the upper or lower band line sustainably in one direction?

What else, if not an expansion of the bandwidth which had been narrow?

Bollinger band expansion will happen as the standard deviation of the upper or lower band line from the middle line increases due to an increase in volatility upwards or downwards.

Before you can jump to conclusions though, first be sure that candlesticks pushing against the upper and lower band lines close beyond such lines.

Meaning, for a successful upward breakout, candlesticks pushing against the upper band line must close above such a line.

And, for a successful downward breakout, candlesticks pushing against the lower band line must close below such a line. 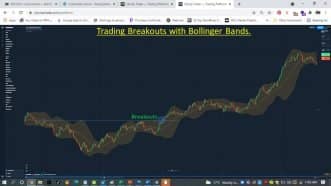 Trading the Breakout with Bollinger Bands.

So how do you trade such breakouts shown by the Bollinger bands tool?

What about the profit targets?

Ride the forming trend until you see signs of weakness in an upward breakout or signs of strength in a downward breakout.

Breakouts usually result in marked price moves in the direction of the breakout and so traders should ride the trend to gain maximum results.

Is it not also useful to confirm the breakout with other setups?

Under normal circumstances, the price should remain contained within the confines of the Bollinger band’s envelop.

So, knowing what you know, what do you make of a scenario where a whole bar is entirely outside the confines of the Bollinger band’s bandwidth?

Such a bar is what we call an outlier bar.

An outlier bar is a candlestick whose whole dimension lies outside the Bollinger bands tool, either above the upper band line or below the lower band line.

What significance is attached to outlier bars?

Basically, prices cannot stay beyond the Bollinger bands for long.

Meaning, if an outlier bar forms above the upper band line, then it is expected that the price will soon fall back to the bandwidth of the Bollinger bands indicator.

On the other hand, if an outlier bar forms below the lower band line, it is expected that the price will soon rise back into the bandwidth of the Bollinger bands indicator. 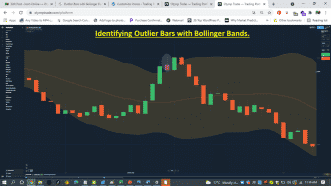 What should we do with the above information?

If you are fond of trading price reversals, you should rejoice every time an outlier bar comes up.

That is because it spells a looming reversal in the direction opposite where it forms on the Bollinger bands indicator.

Expect a bullish reversal setup when an outlier bar forms below the lower band line.

Conversely, expect a bearish reversal setup when an outlier bar forms above the upper band line.

Do you need a confirmation before entry?

As with any other reversal setup, you need to obtain other supporting signals before any entry.

Never give so much attention and weight to a setup in isolation.

Bullish and bearish candlestick patterns are good confirmatory tools to use for this setup.

Outlier bars do not only give entry signals.

They can also serve as exit triggers by indicating that a reversal is lurking in the direction opposite your trade.

When trading, exit that trade before a reversal comes up and all your gains are wiped out.

Say, for example, you were fading a sideways market and had a buy trade running.

An outlier bar then forms above the Bollinger bands indicator. Such serves as a signal to exit the trade.

On the other hand, did you have a sell trade running and an outlier bar formed below the Bollinger bands?

That’s a signal to close that trade.

As it is clear from the above discussion, price action may not entirely depend on candlesticks.

In some instances, you need proven tools which can give life to your price action trading.

One such tool is the Bollinger bands indicator.

Did we leave out any Bollinger bands trading strategy? Tell us about it in the comment section.