5 Most Important Things to Look for Before Trading Breakouts.

Breakouts are price movements out of a predetermined range.

The price must first trade within a given range for there to be a breakout.

A range has a lower and upper limit which the price tends to respect and not break (often support and resistance levels).

If the price fails to respect either of the levels, and it breaks out of the upper or lower bound then such is called a breakout.

It feels heavenly to identify a breakout and even better, to trade it and earn profits.

The ecstasy that comes with it may even make you feel like there are no bad days in trading.

The fun in trading breakouts comes to a grinding halt when you trade one but instead of profits, you get losses.

You will get the shock of your life where you had not set a Stop Loss order. Your account may even be at risk of depletion.

Knowing how ugly it feels, I want to protect you from the second scenario.

That’s why I have come up with these 5 most important things to look for before trading breakouts.

You already understand that the price must trade within a range for a breakout to occur out of such a range.

But there is something technical you need to look out for, and this is the direction the trend was before the range and breakout occurred.

Before the price fell into the range and finally broke out of the range, what was the direction of the initial trend?

If the trend in both cases was upwards and the breakout occurred upwards, then you have higher chances of making money out of such a buy trade.

A downward breakout in such a case may be a fake-out if not highly supported by other evidence.

If the trend before and within the range prior to the breakout is downward, then a downward breakout is most likely to be profitable.

An upward breakout in this case must be backed by so much evidence to prove profitable.

The reason the trend prior to the range and just before the breakout is important is simple.

Prices will tend to obey the trend and the worst thing you can do is to trade against the trend.

It is like catching a falling knife – you are risking a deep cut.

What is the price momentum preceding your breakout?

Is the momentum prior to your upward breakout upwards or downwards? What about that before your downward breakout? 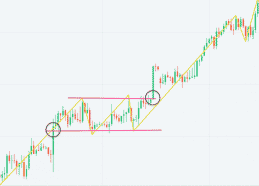 Here is the thing.

But how can you tell whether there is upward, downward, or no price momentum?

Price action and trading indicators have the answer.

A market that furiously moves up has an upward momentum while one which rapidly moves down has downward momentum.

If the market does neither of those, observe your technical indicators which must show high readings of momentum before you trade.

A tool like RSI or MACD will show upward momentum by their lines shifting from reading below to above the zero line.

The opposite is true for a downward momentum.

The direction in which short and long period moving averages cross is also vital in establishing price momentum.

If the crossover is downwards, then it is evidence for a downward momentum.

Has a breakout occurred?

That is okay but it’s not final.

If an upward breakout occurred, what is the next downward reversal point?

Is it at a level you can profit reasonably?

If not, you may as well write off such a breakout because it won’t be profitable.

Did a downward breakout occur?

Consider where the next upward reversal point is.

If it is at a level say 10 Pips, how reasonable is that compared to the amount you intend to risk?

If it is not far enough, then you may consider not taking that trade.

It is at that next reversal point where you actually intend to place your take profit.

If that level then, will not reasonably earn you at least twice what you want to risk in the trade, then of what use is the breakout?

Breakouts must be real and not fake outs.

You can imagine assuming some price movement was a breakout only to lose money shortly after.

The pain, the frustration, and the despair that comes with it is something I would never wish on you.

So a breakout must be confirmed.

How do you confirm a breakout, to tell a real one from a fake-out?

Only allow the price to retest the level it just broke, severally, and successfully before entering a position in the direction of the breakout.

If it is an upward breakout, allow the price to fall back to the upper range level it broke, at least twice, and fail to break it downwards.

Downward breakouts are confirmed by allowing the price to rise back to the lower range level it broke, at least twice without breaking it upwards.

Breakouts are best traded with a Stop Loss at the low of the signal candlestick.

A Take Profit can best be at the next possible reversal point.

You must also ensure that you meet a risk to reward ratio of at least 1:2 in order to risk less with the potential of earning more.

Prior to reading this post, did you know what to look for before trading breakouts?

Now that you know, go ahead and trade breakouts like a pro.